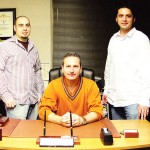 At 5:30 a.m. on a brisk February day, the traffic on the Pacific Coast highway hums along without a single traffic jam in sight. As Raffi Dermenjian heads south, making his way to his business, MemorableGifts.com, he flicks on the radio and listens briefly to the news before changing channels for something more upbeat. At this early hour of the morning, Queen or the Beatles are almost as good as a cup of coffee. They are also good background music for thinking about what lies ahead. Dermenjian begins mentally ticking off the tasks he hopes to accomplish over the next eight to 10 hours.

Pay bills of course…More work on the marketing side…Google and Yahoo ads–must deal with those…Remind the photographer to stop by…Oh, and don’t forget to talk to the copywriter about the new-product descriptions.

The list could go on and on, but by now Dermenjian has arrived at the warehouse where his business is located. For the past seven years, his morning routine has followed this same script, and that makes Dermenjian exceedingly happy because, when all is said and done, he is doing exactly what he always hoped to be doing: running his own personalized gift business.

By the time Dermenjian has finished sorting through his e-mails and reviewing new orders, his staff begins to arrive. Eventually, the pace picks up, and before long another day is underway. Indeed, the only thing missing from this picture-perfect snapshot are customers walking in the door; but as far as Dermenjian is concerned, that’s more than fine because one of the main benefits of running a virtual store like MemorableGifts.com is knowing that his customers are being “attended to” at all hours of the day or night, every day of the year. And best of all, this service is almost entirely automated.

By Dermenjian’s own account, the path to launching his online business was fairly smooth, but that doesn’t mean it happened overnight. If anything, he took the long way around by spending 15 years selling technology software systems and services to the retail industry and Fortune 1000 companies, before he was ready to start a retail gift business. Although he started out following a traditional model —brick and mortar—it wasn’t long before he decided to switch over to an exclusively online business. In many ways it was a logical progression. Dermenjian understood computer technology and was at home on the Internet. In that sense, it was a smart move, even if his timing was less than ideal, because the year he went online with his gift store was 1999, shortly before tech stocks went south. It could have been disastrous for the new company, but it wasn’t. Because Dermenjian was just starting up, he hardly felt any negative effects. All things considered, 1999 turned out to be a pretty good year.

In the years since, Memorable Gifts has grown and thrived. Although Dermenjian has never personally regretted choosing the online business model, he recognizes that a virtual store is not for everyone. “Selling online is different,” he observes. It’s an abstract world. “You are selling something that the customer cannot see or touch. …You have to have a good imagination.”

Imagination is clearly important in more ways than one. Online shoppers typically rely on a couple of images and a sentence or two that describes the products they are interested in. It’s not much to go on. Yet, even with these limitations, e-commerce works. Every day, millions of people hand over their credit card numbers to merchants on opposite sides of the country— or better yet, opposite sides of the planet–because, in a virtual world, distance is no longer the problem it once was, but the major concern to today’s e-retailers is the problem of attracting customers to their sites.

“The thing about bricks and mortar,” Dermenjian says, “is that people will see you when they’re driving by. Or if they’re walking at the mall, they see your store.” But with a virtual store like Memorable Gifts, you rely on advertising to attract customers. So Dermenjian’s marketing efforts occur on a regular basis and by various means: brochures, catalogs and limited e-mail announcements. “We do this at least once a month but not more than twice [a month] because we don’t want to annoy our customers,” he adds. Memorable Gifts is a high-end retail business, and Dermenjian wants to make sure that his marketing efforts reinforce this perception. “We don’t want to be viewed as a low-end kind of company,” he says.

All the same, advertising for an online store is essential, and to understand how it really works you have to start at the beginning with the term Search Engine Optimization. This, in turn, takes you to the heart and soul if the Internet: keywords, or the words that rake online shoppers by the virtual hand and lead them to your website.

The product offering at Memorable Gifts is extensive, featuring more than 3,000 items, such as picture frames, clocks, flasks, keepsake boxes and more. Hundreds of new items are already slated to be added to the website in 2009, with an improved selection for religious occasions, such as baptisms and bar and bat mitzvahs, Wedding, Anniversary gifts, Birthday, new baby gifts, mother’s day, father’s day, graduation gifts, to name but a few.

Listening to Raffi Dermenjian describe his online store, you get the impression he is content with that he has accomplished. A healthy sense of price infuses his conversation, and why not? Pride is one of the main reasons why customers visit Memorable Gifts online store 24 hours a days seven days a week, because they come in search of the perfect gift—one that will express how proud they are of a friend, a loved one, or sometimes, even themselves.

The technical side of owning an online gift store is substantial. At the beginning, Dermenjian did almost everything himself; it took him about three months, working part time to add the gift items and prepare the website. Dermenjian was able to do the rest of the work himself, including taking pictures of the products and updating the website.

Today, Dermenjian has a staff to assist with routine maintenance tasks. The shopping cart system is even easier and more user-intuitive than when he started, and for inventory, they have a good internal system that allows them to make orders on a daily basis. The company also hosts in-house, which entails having multiple servers for backup purposes and to ensure that the site is always up and running. Because DSL is not the ideal service for business needs, Dermenjian relies on a T1 and fiber optic internet service, which is higher-speed and consequently, better. Fiber optics is the new technology, although it is not always available in every location.

The most challenging job by far, though, is quality control–ensuring that every detail of every order is 100-percent accurate before the order is shipped. “We are in constant communication with every department to ensure that we are always on target. …The only way we can maintain a low-error rate is to double-check our work as much as we can,” Dermenjian says.

For this reason, all the personalization is done in-house. Currently, Dermenjian is working on plans to add apparel gifts and printing personalization to his offerings. It goes without saying that this service will also be done in-house, even though it means buying more machines and hiring new talent. “We will not subcontract anything out,” Dermenjian emphasizes.
“We are also proud of our very high customer satisfaction. We make sure that every single order is examined for quality at several points prior to shipping. We are the eyes and hands of our customers. They have trusted us with the most important task, which is to impress their loved ones with a memorable gift. We take this responsibility very seriously, and we make sure to always exceed the customer’s expectations.”
Because Dermenjian is so committed to offering a first-rate service, he is especially careful about hiring the right kind of employee. “It’s not that easy,” he sighs. Not only must the individual have a minimum of technical talents, but also he/she has to understand the company’s mission, especially where customer satisfaction is concerned. Whether the customer is an individual gift buyer wanting to buy a single present, or a corporate customer looking to buy one or more items in the hundreds, Dermenjian treats customer satisfaction as a serious matter. He constantly reminds his staff to put themselves in the customers’ shoes; view the gift as if you were the customer. Make sure it is as perfect as you would want it to be for your own loved one.

But even with the best help, Dermenjian insists on being personally involved with problems related to customer complaints. It’s important for him to let the customer know that he guarantees 100-percent customer satisfaction.
“We are helping people remember their special moments, …We are not in the gifting business,” Dermenjian says. “We are in the celebration-and-adding-smiles-to-people’s-faces business.”

And with that said, Dermenjian has accomplished everything he possible could hope for.
Almost 11 hours later, at 3 p.m. Raffi Dermenjian climbs back into his car, turns on the radio, and strikes out for the Pacific Coast Highway, maybe heading back home. And who knows? As he listens to his radio, he might even sing a song or two along the way.